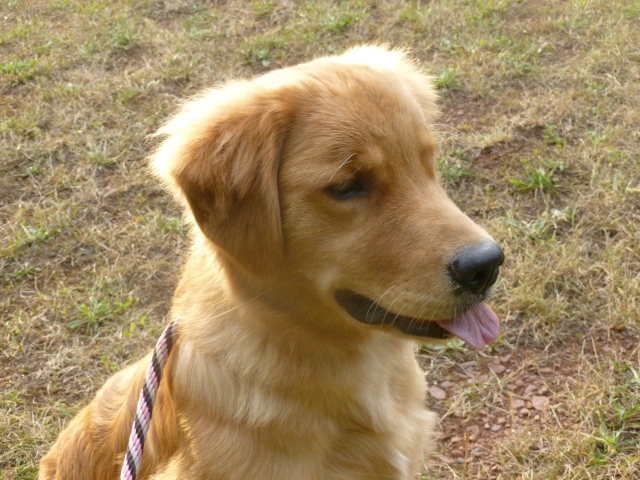 Like I promised, I wish to share with you part 2 as to how my Mercy Miracle came about. It was a joyous time of the year when I had put a deposit down on a litter. This was a repeat breeding that had produced champions before. She was planning two litters and during a day of prayer in between Thanksgiving and the date we met the breeder I asked God which litter and he whispered to me the name of the champion dog that had been produced previously by this litter. Other people had put deposits down before me. I still thought that would not be an issue since we expected for there to be plenty of puppies to go around. I prayed a lot for my puppy during the Christmas season and until the pups were born.

I was hoping for a blond puppy, but when I begged God for a blond puppy while eyeing a bag of Milo’s kitchen treats, God sternly corrected me and told me that since this dog would be used for His purposes, to bring comfort to the hurting and that those people I would visit and minster to would not care what color she is. I had after all longed for a Golden Retriever to give me purpose in life in that I would be using her as an instrument of the unconditional love and mercy of Jesus Christ and as a symbol of peace and hope as well as a source of light in a dark world.

Anyway, the date of the birth of the litter arrived, Super Bowl Sunday 2012 to be exact! Unfortunately, it was not smooth sailing. The birth was problematic. Sadly, two female pups were stilborn. Then a male pup died the next day. Besides, the dam was 6 years old. This would be her last litter, making the pups ore precious. There were only 6 surviving pups left and I was 6th on the waiting list.

Then I recieved some dreadful news on March 7th. Another person, a breeder suddenly decided late in the game that she wanted a puppy after not wanting one initially. Breeders are given top priority over pet homes. My breeder told me that she did not want to have to share the news with me and that I would have to be bumped from the litter until further notice. There was a chance that she might be able to talk her out of it since she was being unreasonable. I felt devastated! I had lost my pup before I even got to bring it home! Satan had stolen the puppy from me that was rightfully mine!

I pleaded with God for 9 days to get the puppy back for me with even greater force than the enemy had used to take her from me. I meditated on God’s word and studied my Message Bible, which was a great comfort to me during this time. I knew in my heart that God had promised me this puppy. There were too many other things that had come into place for me not to have this puppy. I could not possibly fathom or remotely imagine going through the upcoming spring and summer without a puppy! Through His Word God told me that He would do whatever he had to do to make sure the puppy He ordained for me for me to have would indeed come home with me. I was telling people as a means of comforting myself that this puppy would be my Mercy Miracle, my M & M dog.

One thing I did not mention that was also an important factor, was that when I met with the other breeder 9 years earlier when I was 27 years old, I was introduced to two dogs that I had no idea would have divine significance later in my life. She was also planning a repeat breeding and using a stud dog from Richmond Virginia even though she lived in Jarretsville Maryland. I had met the dam, Maddie that she was planning to breed. She also introduced me to the offspring from the previous breeding of Maddie and the stud dog from Richmond, Tonka. I met Bang, the son of Maddie and Tonka. He was so cute and funny with a gorgeous shaped head, although he was a little dark to my liking. She also introduced me to Bill. Bill was the sweetest friendliest most gentle Golden Retriever I had ever had the pleasure of meeting. I was thinking “Why isn’t she breeding Bill to Maddie?” Lo and behold, this breeder that I had committed to was the same breeder in Richmond who once owned Tonka! The dam of this litter that I had placed a deposit on was Bang’s daugter! The sire was Bill’s son! How could that not be God! During these grueling agonizing long days, I kept replaying these truths in my head.  I kept thinking about how God led me to this breeder and how he whispered to me the information I needed to decide which litterto put a deposit on. As it turned out, the female that was to be bred to produce this other litter got sick and could not be bred. God kept reassuring me all though those nine days even though there was turmoil in my mind and lies from Satan explaining why I was not meant to get this puppy. We had plans to help my girlfriend get stuff out of an out of town storage unit that would take place two days after I recieved the bad news. I knew had to be strong for my friend.  I had kept my mouth shut about the puppy the whole time. We had made a stop during this road trip journey for dinner and dessert. While my girlfriend and I were chatting, noticed that she was wearing an M&M jacket! I knew right then that God would get my puppy back for me. He showed me a couple of more signs also.  I was staring at clouds in the sky as we were heading back from the out of town storage unit and I had asked God to show me a sign. I looked up at this particlar cloud, hoping it would take some shape that would be sigificant. I was meditiating on M&M. The cloud actually gradually took the shape of an M&M as if I had control of making it into an M&M. It was not a perfect M&M, but nonetheless, it was enough of an M&M to count. Lastly, when I was getting stuff out of my trunk a few days later, I saw an M&Ms wrapper!

I decided to call the breeder the next day to see if she had any good news. She informed me that she had a meeting scheduled with this other breeder later that very same day. I prayed ferverently during especally during the time the meeting took place for God to convince her to release the puppy. She did! I called the breeder early the next morning to get the news and she told me that  had woken her up but that I would be getting my baby! The 9 day scare had come to an end! It was time to celebrate my Mercy Miracle!

I am seeking a meaningful life in Jesus Christ. I am not sure exactly what that means, but I am on a journey to find out. I seek a most amazing way beyond my wildest dreams to fulfill my calling, purpose and destiny while enjoying beauty, art, culture, nature and science the whole way thorugh.
View all posts by journeywithmercy →
This entry was posted in Uncategorized and tagged Miracle. Bookmark the permalink.

4 Responses to My Mercy Miracle